This rule transliterates one alphabet into another. Its main goal is to transliterate Non-English characters from different languages into their English/Latin representation. For example, the German character ü can be transliterated to ue (the name Müller can be also written as Mueller).

We need several such equivalent character pairs to convert one language into another. The entire set is called a transliteration map. (This is really some kind of a find-and-replace rule.)

The Rules window changes immediately to show the French characters and their English equivalents. 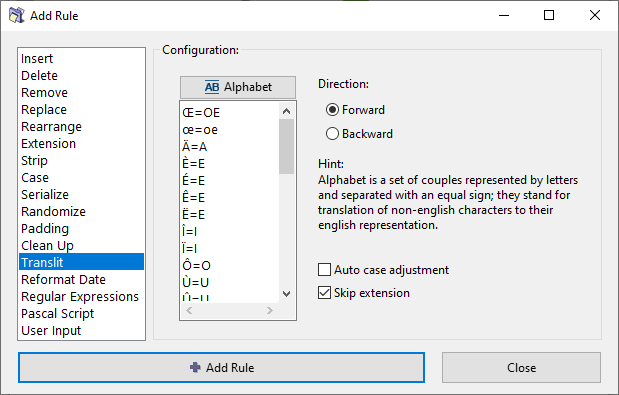 Note that such editing does not alter the saved version of the map. The map is edited just for a one-time use. If you select the same Translit map again, ReNamer will load the original version, not the edited version. You will see how to alter a transliteration map in a section below.

Click in the Translit Alphabet window, and start entering your custom alphabet.

Transliteration alphabet consists of two equivalence parts (or a couple), which are entered one per line and two parts separated with "=" (equal sign). Alphabet should not contain spaces and should have case discarded (case is adjusted automatically). Also, make sure to put couples which contain greater number of characters at the top, so they will get processed first and will not get processed partially by shorter representations. Below is a simple example:

The process of saving an edited Transliteration map is similar. The only difference is that the Save Translit window (see above) shows the current map's name. You can press OK to save the changes you've just made, or enter a new name to create a new translit map for the edited version of the current map.