After the renaming is over, ReNamer can do a lot of other things depending on the Program settings for renaming. For example, it can automatically clear off the Rules and/or the Files pane or close the ReNamer window automatically.

When is a file considered "renamed successfully"? 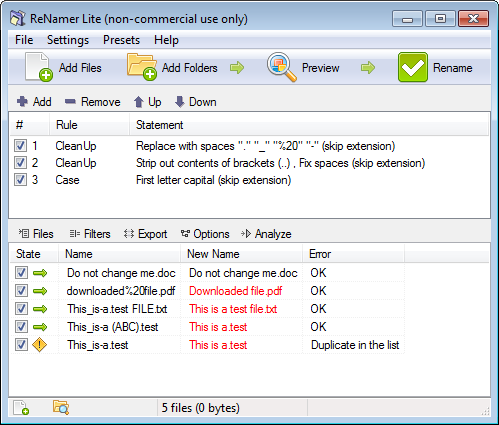 Look at the first file (Unchanged file.doc) in the above screenshot. That file is not affected by the current set of rules. Yet, so far as ReNamer is concerned, all the marked rules were applied to it, and the renaming operation (consisting of renaming Unchanged file.doc into Unchanged file.doc) didn't give any errors, so ReNamer considers that this file was successfully renamed.

Each renaming operation can have four different outcomes:

You can set ReNamer's Program settings to take some conditional actions on the files based on their outcome. For example, you can clear off the files that were NOT renamed in the current round of renaming.