This rule uses Pascal/Delphi programming syntax and conventions. ReNamer comes some preloaded scripts. Let us see how to use them, and later see how to add a new script. 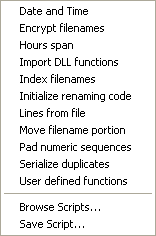 Even if you do not know how to write a script, you can easily use scripts written by others.

First, visit the User Forum and search for a suitable script. The Forum already has a large number of such scripts. Some of these scripts have embedded comments about how to customize the script.

If you cannot find a suitable script, you can request other users to write a script for you.

Once you find such a script, follow these simple steps:

Writing your own scripts

To write your own scripts, you must have knowledge of Pascal script.

We will assume here that you already know how to write pascal scripts. The step-by-step procedure is as follows: